1982 to the present day, The Fourth Generation.

Through the 1980s, David, alongside his Father, Henry, took on more of the responsibilities for running the Workshop and realised that he needed to look outside the family for new recruits. Fortunately, Derek Elliott, a local boy from Moreton-in-Marsh and a pupil at Chipping Campden School, decided to respond to a School Assembly announcement about the Workshop looking for new recruits. Derek paid them a visit and was immediately hooked; he was recruited in 1982.

In 1990, with the death of his father, David took on the full mantle of running the Workshop.

The first of the fourth generation of Harts to join the Workshop was Alistair Hart, David’s nephew. Alistair started in 1986 but in 1989 decided his future lay elsewhere; he now makes precision parts of aircraft and satellites. The next Hart to embrace silversmithing was William, David’s son. William had read Computer Sciences at university but, ultimately, could not deny the pull of working with silver; he started work in 1990. Alistair’s younger brother Julian, originally studied motor-vehicle engineering. Like his cousin, William, he, too, felt the pull of working with silver and joined the Workshop in 1994. 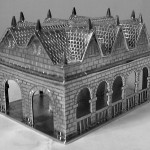 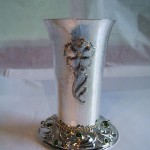 The Third Generation
The Trust